Imprisoned memories. Chum Mey stands inside the exact same cell that held him captive in 1978 & 1979 at the Khmer Rouge’s Tuol Sleng prison. 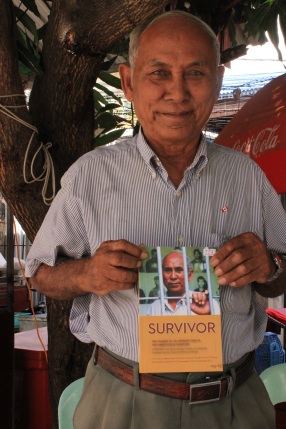 One of three living survivors to escape the clutches of Tuol Sleng prison, Chum Mey sells his book at the facility’s gates.

Chum Mey, a frail, white-haired Cambodian man in a pinstriped shirt stands beneath the shade of an oak tree at the gates of Tuol Sleng Genocide Museum, a Khmer Rouge prison camp in the Cambodian capital of Phnom Penh.

Melancholy grey eyes suggest a sorrowful past, despite the stoic smile he’s wearing as tourists and strangers pass by.

12,000 people were sent to Tuol Sleng at the height of the Khmer Rouge regime. Only 12 survived the torture complex. Out of those dozen, only three are alive today.

“It was very bad,” said Mey who lived in constant fear of starvation and physical abuse from his captors.

“I had nothing to eat because the Khmer Rouge provide food to me only twice a day but not enough. Only a little bit; some grains or rice. Only two meals per day.”

Tuol Sleng, often abbreviated S-21, is a tragic remnant of Cambodia’s tattered past. And nearly half a century later this past is still very much alive in Mey’s mind. Following Cambodia’s civil war in the 1970s, this former school was transformed into a torture complex, a prison — and above all, an agent of genocide.

Mey’s story is one he passes onto as many people as possible. He’s a true storyteller, messenger and a walking narrative of Cambodia’s unusual and violent past. He sells books at the entrance that chronicle firsthand the horrors of imprisonment he witnessed at Tuol Sleng. Fittingly, it’s called Survivor. He charges just a few dollars and donates part of the proceeds to an organization he helped found that offers support to surviving families of the Khmer Rouge. 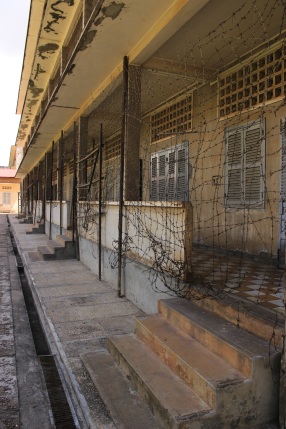 The reality of S-21, a former Khmer Rouge prison in Phnom Penh. Each small room is a cell that used to house prisoners.

When the Khmer Rouge seized power in 1975, most major cities were evacuated and Mey began work at a clothing factory. Baseless arrests were frequent at this time. He, too, was soon arrested for no reason, landing him and his family in S-21.

Then came the torture.

Mey was accused of being a traitor and relentlessly interrogated for 12 days. He denied the charges. They ripped out his toenail with pliers. Lying on the floor writhing in pain, his feet smeared in his own blood, Mey falsely admitted to conspiring against the Khmer Rouge with the CIA and KGB, foreign government agencies he had never even heard of before. Like many prisoners at S-21, Mey concocted a fantastical story to elude the vicious torture his captors.

Many were not so lucky, however, as a vast majority of prisoners were shipped off to the execution grounds nearby known as the Killing Fields after confessing to fabricated crimes. This was all part of the Khmer Rouge’s plan to exterminate the intellectual and capitalistic portion of the population in an attempt to transform Cambodia into a rurally-based agrarian society.

One of the torturing devices that used water to extract confessions from prisoners.

The Khmer Rouge used to intimidate the Cambodian people with one of their popular slogans, “To keep you is no gain, to destroy you is no loss.”

Luckily, Mey proved to be a ‘gain.’ His former life as a car mechanic made him useful. His ability to fix a typewriter saved his life.

Typewriters were integral to daily life at S-21. The Khmer Rouge needed its prisoners’ confessions, which were recorded on paper by use of the typewriter.

“While they torture prisoners they always write a confession from a victim,” he adds. “They type the prisoner’s confession by the typing because the typewriter’s broken and no one can fix that’s why the Khmer Rouge asked me to do that.”

Mey reminds me of Phillip Riteman, a Polish-Jewish Holocaust survivor I once interviewed in Canada. Riteman lost his entire family to the gas chambers of Auschwitz during World War II. Somehow, like Mey, Riteman managed to overcome his hopeless surroundings and survive.

In 1982 Mey made his own pilgrimage to Germany to see Nazi concentration camps. Mey hoped he could make some sense of what the Khmer Rouge through witnessing the equally sadistic genocidal legacy of Hitler. In his book, he draws many parallels between his time in Tuol Sleng and Nazi prison camps.

“When I was taken to the camp, I thought of Tuol Sleng. There was the same killing in these two places,” he writes in Survivor. 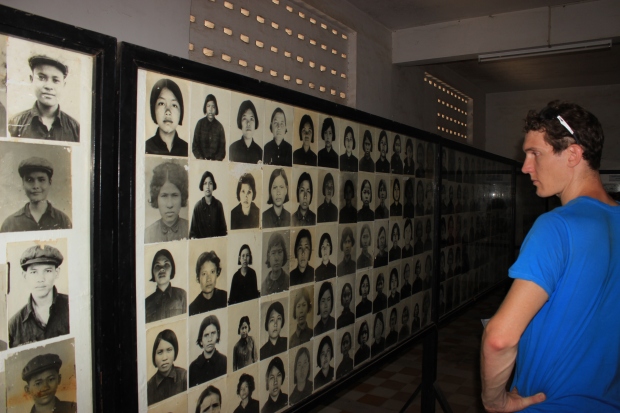 A tourist looks at all the victims of S-21. Prison officials catalogued every prisoner that entered the jail.

A child visitor walks past exhibit cases with skulls on display at Tuol Sleng.

Chum Mey shows the exact cell that he was caged in after his arrest by the Khmer Rouge at S-21 prison. Here, he demonstrates how his leg was cuffed by this iron bar.

“The difference was at that camp they killed only Jews. It was also different from Tuol Sleng because they had many beds and didn’t have to sleep on the floor. They could bathe, too, so Tuol Sleng was worse… They told us how Nazis killed people and showed us a place where people were burned alive.”

A tortured soul. Chum Mey explains how the Khmer Rouge tortured him.

Mey later directs me to the same cell that enclosed him in 1978. We leave the translator behind and walk amongst the barbed wire passageways past hundreds of photos of S-21’s victims, their clothes and human skulls. “022,” his cell number, is outlined in black spray paint near the barred window. Dusty brick walls, iron bars and checkered tiles were all Mey stared at for days on end while in captivity.

The experience is haunting.

We endure several moments of uncomfortable silence staring into the brick chasm together. I picture him, a younger man, decades ago, helplessly shackled in this area not much bigger than an airplane bathroom.

And for Mey, unfortunately, it was a bathroom, too. He shows me a small plastic bottle he was often forced to urinate in. I cringe. He sits down and he pretends to attach an iron bar to the base of his tanned ankle. indicates how a chained bar in the cell used to be attached to his leg. This was life under the Khmer Rouge.

In 2009 Mey gained some closure for the first time since escaping the cryptic cells of S-21. After decades, three prominent members of the Khmer Rouge were sentenced to life in prison. This was the first justice Mey and the Cambodian people tasted after decades of passive pain. Mey attended testified against his former captors at the tribunal, including Kang Kek Lew, better known by the alias Duch, the ruthless official who oversaw Tuol Sleng’s operations.