Run Phyros, a Khmer Rouge survivor, stands outside the Killing Fields or Choeung Ek where countless Cambodians were executed. 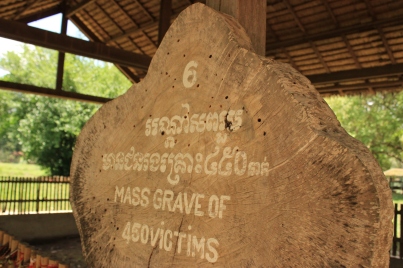 One of the mass burial sites at the Killing Fields, a place that claimed many Cambodian lives.

My Cambodian guide Run Phyros tells me about how the Khmer Rouge exterminated his entire family as we leave the Killing Fields.

Nearly every middle-aged Cambodian I’ve talked to has felt the wrath of Pol Pot’s regime in one way or the other.

Standing in front of the Buddhist stupa memorial at the Killing Fields which holds the remains of thousands & thousands of Cambodians.

Run’s family’s house was seized in Phnom Penh following the evacuation of the capital city. His parents and sister soon perished in the mass on slaught. Run was 12-years-old. He and his grandmother fled to the countryside where they sought shelter on the Vietnam border.

“I lose my family — three people. I lose my father, my mother and my sister. They bring together to kill together but I ran away with my grandmother. I’m very lucky, you know?” Run reflects.

Run’s parents were educated. His father was a hospital worker and his mother worked an office job with the army.

His grandmother is his only lifeline to Cambodia’s tattered past. Run visits her often. She’s 89. Run now has his own family — a wife, two girls and two boys. The oldest of children is 21 and his youngest is 13.

After Pol Pot’s regime was toppled, Run was 16. His early teenage years had been robbed from him. In 1986 — when Run was in his early twenties — he went into the jungles to fight the last of the Khmer Rouge. He exchanged gunfire with Khmer Rouge guerillas for three years but 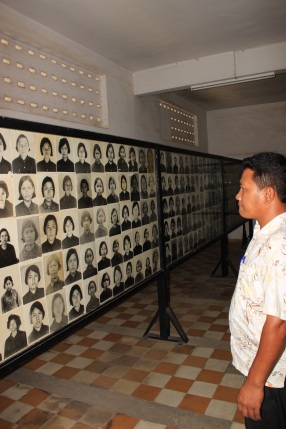 Run looks on at the thousands of victims that were imprisoned & tortured at the S-21 prison near the Killing Fields.

claims he never killed anybody.

“The Khmer Rouge made me angry. I wanted to go fight them. We go fighting again and again. Many times. I shoot a lot with the Khmer Rouge but I never kill them. I use an M16 and AK-47 and a shotgun,” describes Run.

“I was fighting and the Khmer Rouge could not move,” he recalls. “I find two guys. After that the government keeps them in jail. I just bring them. I told them, ‘I’ll not kill you. Just bring you to the jail. Put your gun down and follow me.’”

His friends wanted to slaughter the Khmer Rouge solider. Run prevented this from happening and took the soldier prisoner instead.

Run’s remarkably calm in telling me. I ask him how he could show mercy after what people like that soldier did to his family.

Run proudly smiles for a photo with his youngest daughter, 13, in Phnom Penh.

Run returned to Phnom Penh in 1990 where he took up boxing and martial arts. He then became a security guard for the Cambodian king before starting his family.

I use my sleeve to wipe my eyes. Run and I shared very different childhoods and Cambodia was continuing to do strange things to me. I was infuriated and bewildered. Another sobering day in Southeast Asia. Another I won’t forget.

My next post explores the story of Chum Mey, one of three known survivors who overcame the terrors of or Tuol Sleng or S-21, a Khmer Rouge prison camp in Phnom Penh.