Brother Kandaal, a monk in the Bronx, sits down to discuss the importance of meditation in Cambodian-Buddhist culture.

NEW YORK — A drizzly autumn afternoon in the Bronx has camouflaged Morris Avenue in monochromatic grey. On this bleak street one figure stands out: A Cambodian monk clad in a vibrant orange robe.

His name is Brother Kandaal.

He’s standing on the porch of his two-story monastery known as Wat Jotanaram. Kandaal is the head monk of this temple that caters to the Cambodian community in the Bronx.

Inside golden statues of Buddha line the walls, elderly women chant Khmer songs, and Kandaal is about to lead a group meditation. About a dozen people crowd around him and someone pulls out a special mat for Kandaal to sit on.

After awhile Kandaal invites me to try. He says meditation is central to Cambodian-Buddhist culture, that it provids healing, peace and release from stress, and that he wakes up every morning at 4:30 a.m. to meditate.

After crossing my legs, closing my eyes, and resting my hands on my knees, I’m meditation ready — all in about 30 seconds. 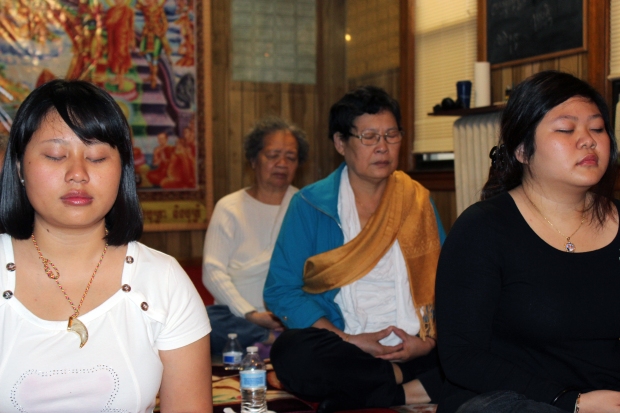 Meditation looks peaceful but it’s not exactly pain free, especially if like me, you’re six-feet tall, uncoordinated and inflexible. Brother Kandaal eventually nods in approval of my pretzeled positioning, he laughs at my apparent difficulty, and then we begin.

Minutes in, my kneecaps feel like they’re exploding, my body is a house a pain, and I feel like a contorted circus acrobat. Seconds seem like hours, minutes melt into days.

I came looking for peace but instead found torture.

I steal glance at Kandaal. He sits expressionless, stoic, and silent like a statue. What a showoff. He makes it look so easy. Then Kandaal’s iPhone beeps, his timer, signalling the end our meditation session. Relief.

I thank him for the enlightening experience and hobble down a flight of stairs, a shell of my former self. My limbs regain feeling as I step out the door.

That was definitely enough meditation for one day.

This was the fourth & final instalment of Sleepless in Singapore’s “Cambodians in New York” series examining Southeast Asian culture in the Bronx.

← Buddhism in the Bronx: Wat Jotanaram (Cambodians in NYC Pt. III)
Blowing Out the Candles: Top 5 Sleepless in Singapore Stories →