A young man pays respect to the victims of the Killing Fields & lays a bouquet of flowers outside the site’s memorial.

Skulls piled into the sky at the Killing Fields near Phnom Penh.

Thousands of craniums stare back at me with cold, petrified expressions.

Spider webs dangle in eye hollow sockets. Thousands of skulls — piled as a high as a small apartment building — loom in front of me.

I’m describing Cambodia’s genocide memorial known as Choeung Ek or perhaps better recognized as the Killing Fields. The place is a tragic reminder of the Khmer Rouge’s brutal, disgusting rule from 1975-1979.

A place where delusional dictator Pol Pot sent millions of families to die, the Killing Fields is the most notorious of Cambodia’s many mass burial areas scattered across the nation.

After Pol Pot evacuated all of the country’s urban areas, educated or capitalistic Cambodians, as well as foreigners, became candidates for death.

Organized religion and the market economy were dismantled to make room for an envisioned classless and dependent agrarian society.

The Khmer Rouge emphasized a revenge-oriented xenophobic mandate on the old classes. If you wore glasses you were considered educated — and they killed you. Many were falsely accused of being CIA or KGB spies. They transformed the country’s youth into their own spies.

Torture and forced confessions were widespread during the Khmer Rouge’s time in power. Cutting fingers off and medieval-like water dunking apparatuses were used to extract fabricated statements. Slaughtering children was routine. Victims and prisoners dug their own graves before a bullet or a pickax penetrated their heads.

I’ve been to Germany’s Nazi prison camps and although I was much younger then, that experience never moved me how the Killing Fields did.

These were the vicious trademarks of the Khmer Rouge.

The Holocaust looms in my mind as I absorb the horrific sites around me. 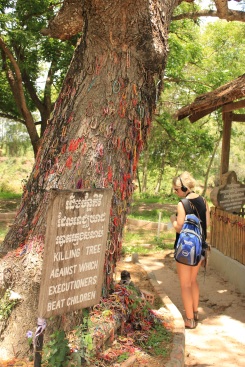 A tourist looks at tree where the Khmer Rouge would torture children at the Killing Fields.

Although equally devastating, the Khmer Rouge’s genocidal actions dwarfs Adolf Hitler’s misdeeds based on time. In four short years, Pol Pot’s ruthless form of government killed anywhere from two to four million people. The exact number is unknown. Most estimates place the death toll between one and two million people, but organizations like UNICEF claim the genocide led to upwards of three million deaths.

Unlike the Nazis, who had mastered the efficiency of mass executions with gas and incineration chambers, the Khmer Rouge were not so neat — a fact evidenced by the bones and teeth scattered throughout the Killing Fields. Heavy rains and erosion constantly unearth human remains at the site.

After spending 30 minutes at the Killing Fields I returned to my hotel. I cried. I yelled at the walls. I was confused and terrified. I wanted Canada. Cambodia’s past couldn’t possibly be real. But it was.

A physical space has never psychologically impacted me so strongly before. My eyes are still watering now as I write this on an airplane, a week after departing Cambodia. A woman across the aisle won’t stop staring at me.

My next posts will detail two individual stories of survivors who escaped the deathly grasp of the Khmer Rouge.