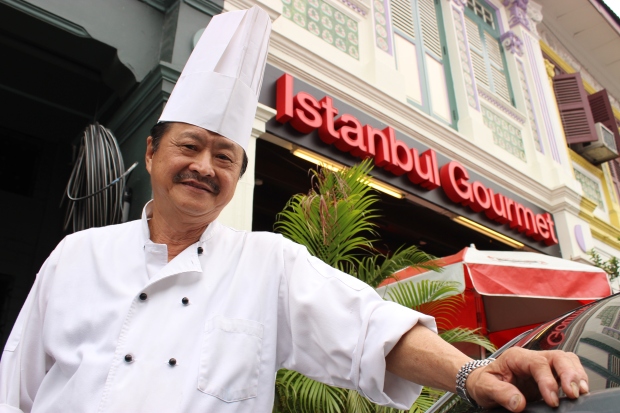 Henry Teo, owner & operator of Istanbul Gourmet at 314 Joo Chiat Road in Singapore’s Katong district is quick to please customers with a delectable menu of foods from across the world.

There’s more to chef Henry Teo than meets the eye.

I met Henry on one of my first days in Singapore. A true character, he operates a restaurant across the street from my hotel called Istanbul Gourmet. Although Henry has never been to Turkey, he makes a hellishly appetizing kebab. His passion for Middle Eastern cuisine is tangible. All of Henry’s food caters to the Muslim tradition of Halal, too.

I frequent his restaurant three or four times a week. The service is fast and the food is exquisite and is priced to please. Only $5 SD for a kebab.

I go for a taste of nostalgia, too.

Henry’s donair kebab is the closest thing to the kebabs my American friends and I devoured under the stars after evenings of debauchery in Urbino, Italy in the summer of 2011. I miss those nights and think of them often. A bite of Henry’s kebab returns me to the cobblestone walkways and moonlit piazza of the castled Renaissance town. Okay, so I might have an unusual obsession with kebabs. Big deal.

Henry knows my taste for kebabs and doesn’t even take my order when I come in anymore. He just brings me what I want.

Laksa, a curry based kind of soup with noodles and prawns or chicken, as well as a spicy, steamed fish curry are other specialties of Henry’s. After sampling these dishes, you’ll be led to believe Henry was from India in his past life. Despite his Chinese background, Henry has absorbed the dishes of authentic Indian cuisine.

Henry has quickly become a friend. Aside from the food, Istanbul Cafe is a place I can also pop into for some good conversation.

Henry, 63, was a legend in Singapore in the 1970s and 1980s. He was the best ice sculptor in the city when the trend of banquet ice carvings took off.

An up and coming chef in Singapore in his early twenties, Henry emerged at the forefront of event catering in the city due to his careful attention to culinary detail and ability to transform frozen water into art.

“I used to be a playboy,” Henry told me with a grin as we sip Tigers at Laguna Hawkers Center near East Coast Park on a humid Friday night in Singapore.

A world traveler, he perfected his culinary abilities in Australia. Henry used to drive a Mercedes and owned a yacht. He catered glamorous events for prestigious politicians.

Life is more modest now. He’s a proud grandfather of three. All of his children have bachelor, masters and doctorate degrees in a variety of fields. They live across the globe.

The walls of Istanbul Gourmet are adorned with dozens of newspaper articles documenting Henry’s amazing career. At that point in his life, Henry carved up more ice than NHL legend Wayne Gretzky. One article explains how Henry destroyed the competition at an ice sculpting contest put on by a Hyatt hotel in Singapore, Henry’s employer in his younger days.

Contestants had an hour to carve up a 400 lb. block of ice. Then 28-years-old, Henry took just 28 minutes to sculpt a picture perfect roughly five-foot tall merlion. He claimed first place by a large margin. A Styrofoam replica of that same merlion sculpture sits proudly outside Istanbul Gourmet. Oh, if you didn’t know, a merlion is a mythical lion-like beast popular in Asian culture. 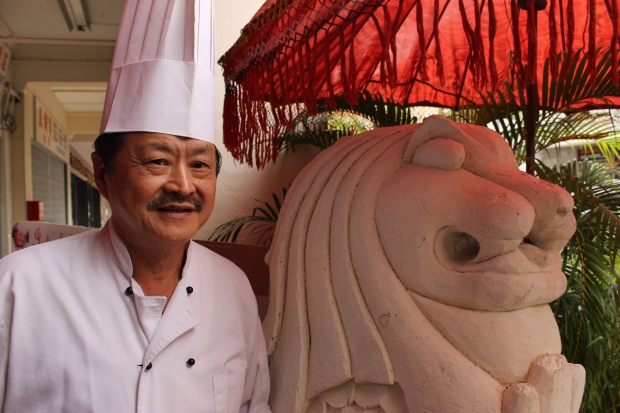 Henry shows off the large replica merlion he carved out of ice at a competition a couple decades ago. 28 minutes after being handed a block of ice he produced this.

For Henry, mastering this intricate art form was a breeze.

“It was no problem. I find it very easy. You have to have patience and you can carve anything,” he said.

Ice swans and violin shaped vases for flowers were other trademarks of Henry’s ice sculpting days. He explained that during one banquet he carved out an enormous ice basin to chill his guest’s champagne. That wasn’t complex enough for Henry. He decided live goldfish would be the perfect finishing touch. And so goldfish swam amongst the bubbly that was submerged in water. Don’t worry, the fish survived and he gave them to children in attendance at the end.

Now 63, Henry points out the merlion he carved in 28 minutes at the Hyatt competition in 1978.

Henry’s sculptures remained intact for 10 hours before melting. Not much of a sentimentalist, Henry was rarely saddened to see his works of art transform into puddles of water.

“It meant my job was completed,” he joked.

Before ice, Henry moulded sculptures out of butter. From dairy he transitioned into ice. Before butter, it was plasticine, a medium he was obsessed with as a child. An artist at heart, Henry likes creating things with his hands. Henry even used to teach ice sculpting at a local community centre. My pleas for him to show me his proclivity for frozen art have unfortunately been denied. Henry has long retired his ice pick to focus more on his cooking and catering enterprises.

If you find yourself strolling through the cultural melting pot that is Joo Chiat Road, visit Istanbul Gourmet. You’ll be glad you did. And you might just make a new friend.

Stay tuned for a cooking lesson with Henry.

One thought on “Frozen Art: The Ice Sculpting Kebab Chef of Joo Chiat”