Rodiah Aling, 51, is sweating after just a few minutes under the scorching Malaysian sun outside Balud Butu. Her walks to the reservoir 20 minutes away are a testament of her perseverance.

As water flows from a tap outside Roadiah Aling’s home, tears from her eyes do the same.

These are tears of joy. Her smile is contagious. It’s the first time her tiny Malaysian village of Balud Batu has had clean, accessible drinking water, a luxury taken for granted in urban centers and much of the Western world.

According to the United Nations, water scarcity is a widespread global dilemma, affecting more than 40 percent of the planet’s population. The U.N. predicts that by 2025, 1.8 billion people will be living in areas where water is not available.

Water splashes down and trickles off Rodiah Aling’s hand at the newly installed tap behind her house in Balud Butu.

Balud Batu has traditionally been one of these regions.

Time has overlooked the small village. A far cry from modern, Aling and her people live in small wooden open-air longhouses. Electricity comes from a generator. Chickens roam the premises and malnourished dogs seek refuge from the sun underneath her house. Small children frolic about, displaying decaying smiles, a sign of the poverty here.

Until recently, Aling walked 20 minutes in the scorching heat with sweat stinging her eyes to the nearest reservoir to fill containers with drinking water. Now, a tap has been installed behind her house.

I had a Malay translator and was lucky enough to interview Aling and the people of Balud Batu.

“We needed to do it. There’s no point in complaining. It just needed to be done. Today is like a miracle or a god’s gift that we now have water coming and we now don’t have to do that walking anymore. It’s an answer to a prayer,” she says.

Sometimes she bathed and did laundry there, although water used for these types of chores are also collected in basins underneath her roof when it rains.

When there was a lack of rainfall, the shallow water in the old reservoir became stagnant and contaminated, causing skin irritations.

organization Raleigh International is responsible for mobilizing funds and workers to help install a pipe that runs 3.4 kilometers from the reservoir into the village. Partners of Community Organisations in Sabah (PACOS) also worked alongside Raleigh. The project cost approximately $10,000 USD.

“There’s no counting how happy I am,” Aling says.

Aling, 51, is no ordinary villager. She’s the settlement’s stoic leader and a voice of courage and wisdom. Aling is fondly referred to as “Auntie” throughout Balud Batu and her story is one of perseverance. At the age of one, her mother died from a stomach illness. When she was old enough, Aling inherited much her household’s domestic responsibilities, which included raising her siblings. She grew up in a nearby village of Tandelk Kota Marudu and migrated with her family to Balud Batu in 1984. 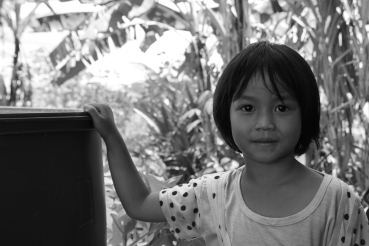 Marlini Jackson, 4-years-old, poses here next to a barrel of rainwater collected from Rodiah Aling’s roof.  This little girl caught me eye and stole my heart. She was so cute. I almost cried upon editing the photos, noticing that her teeth were yellowing with decay, a devastating symbol of the poverty in the Sabah region of Malaysia. Still her soul shone brightly. The new water source in Balud Batu ensures another generation’s survival. 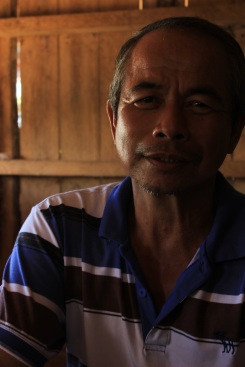 When Jason Bin Aling, Rodiah’s brother, moved to Balud Batu in 1986, he said “life was much different.” A father of three, the new water source will improve the quality of life for future generations of the village.

One of the few women village heads in Malaysia’s rurally isolated and impoverished Sabah province, it’s a role her father, a past leader, passed onto her in his will when he died in 2007.

Having clean, safe drinking water for the future generations is of the outmost importance to Aling, who has three children.

In a place heavily dependent on agriculture — an industry equally dependent on water — Balud Batu depends on the availability of the treasured resource for not only economic independence, but survival, too.

“It’s very important because it’s a basic need not just for humans but our animals and plants,” Aling says.

Rodiah’s cousin, Jackson Aling, is a rubber tree and rice farmer. Now, he can expand into vegetable farming, too. He’s excited to provide his family and seven children with a more nutritious diet.

“When I came here in 1986, life was very different. We had to work very hard to get water or electricity. All our lives have been changed by the new water source,” he says.

Jason is upset by the unsustainable lifestyles of people who have water readily available in their houses or at conveniences stores. To him, water is gold, and something not be squandered.

For now, Balud Batu will enjoy an accessible water source and PACOS will continue to make trips into the village to help its people maintain the recently installed infrastructure.

Editorial Note: This is an excerpt of a story I published in Asian Geographic.

One thought on “Fountain of Life: Balud Batu’s Water Crisis”