Angkor Wat: Behind the Lens 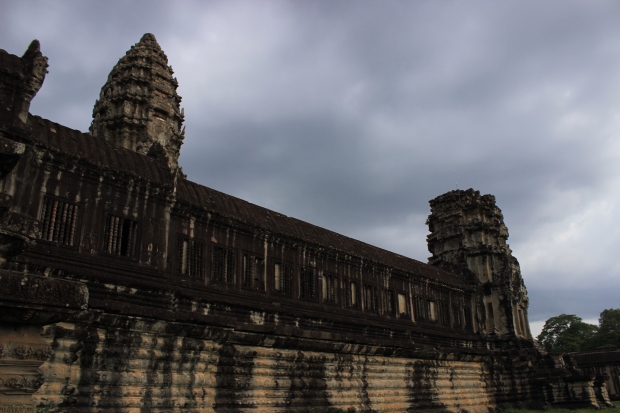 The impressive remnants of the Khmer Empire. 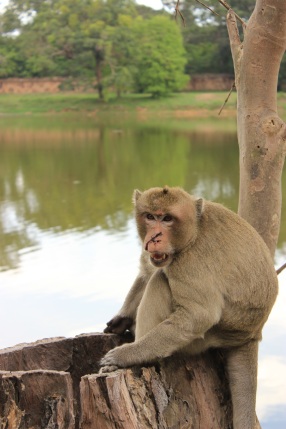 The monkey that nearly bit my face off near the entrance to Angkor Wat.

Calling Angkor Wat a majestic place is a gross understatement.

A sacred remnant of ancient Khmer culture, Angkor Wat, north of Siem Reap, is a symbol of immense Cambodian national pride, a tourist frenzy and a popularized blockbuster film set rolled into one.

I spent three days traversing this expansive labyrinth of temples. I could have spent years. I devoured Angkor’s vast splendor.

I wish the lighting had been better for my photographs, as the sky remained grey for most of my time here. Yet, I still came away with the most extensive photo editing assignment of my life, the labours of which, you’ll find below.

He wrote, “One of these temples — a rival to that of Solomon, and erected by some ancient Michelangelo — might take an honourable place beside our most beautiful buildings. It is grander than anything left to us by Greece or Rome, and presents a sad contrast to the state of barbarism in which the nation is now plunged.”

The largest religious monument in the world, Angkor Wat rises up like something out of a dream and stretches over 400 square kilometers.

I hadn’t been this overwhelmed architecturally since my trip to the Mayan ruins of Chichen Itza in Mexico in 2005. Angkor Wat is thought to have been constructed in the 12th century when it was used to worship Hinduism, before its inhabitants moved towards Buddhism in the late 13th century. The Khmer Empire thrived here until the 15th century. 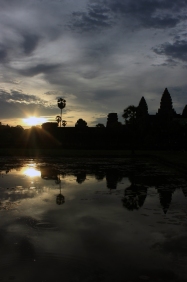 The sun finally illuminates the skyline.

I arose at 4 a.m. to capture the sun rising over the temple city. Dazed, confused and exhausted, my body sways in the back of a tuk tuk rattling along the sinuous path to Angkor. I swat at mosquitoes. One of my hands gripped a tripod. The other clutched a cigarette.

I was still annoyed by the tourists I had encountered in the daytime a day earlier. Ravenous beasts they were, trampling through every square inch of the ruins. It was like an archeological Disney Land. Too many people detracted from Angkor’s mystique. I wanted it all to myself.

Disappointment greets me. Hundreds of photographers were assembled along the banks of the water surrounding Angkor. The early bird wasn’t getting the worm today. I squeeze through the crowd. The photo-hungry were nearly foaming at the mouth. They waited for the solar birth like a pack of hyenas anxiously eying a gazelle, waiting for just the precise moment to pounce. 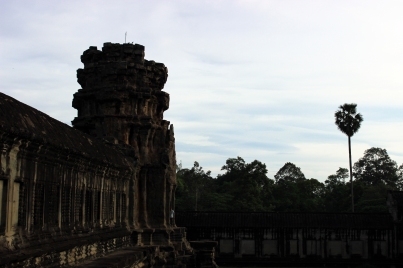 More than just architecture, the facade is of Angkor Wat is a symbol of national pride in Cambodia. 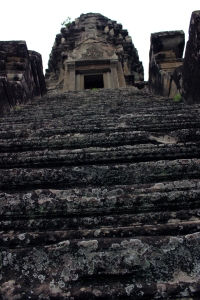 From the bottom to the top.

I shoot what I need and move on. There would be no escaping the tourists.

And then I made the biggest tourist mistake of them all.

I sit down with my guide for a quick breather before continuing on the remainder of our excursion. I was so accustomed to street food in my recent travels, I let my guard down. It was early. Flies buzz around us. The menu looked suspect so I ordered some bread and jam. Simple, right? Wrong. Try hazardous.

This was my introduction to food poisoning in Cambodia.

Luckily it wasn’t until the afternoon that I abruptly returned to my hostel due to severe stomach trauma. So I got to enjoy Angkor a little longer before my exploration was interrupted by my bowels. Despite the stomach problems, Angkor Wat was a major highlight of my trip. It was also the most enriching archeological experience I’ve ever encountered.

Next on my list was Ta Prohm, and the infamous Angkor Thom temple Bayon. 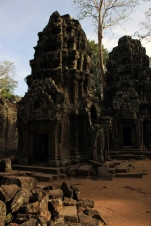 More than just a pile of bricks. Around the site of Ta Prohm.

The ancient Khmer people carved stone cobras like this one across Angkor Wat.

A testament to the ongoing construction at Angkor. 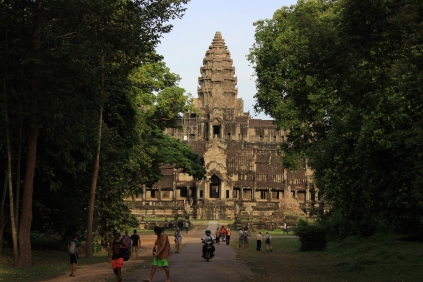 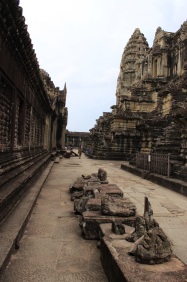 This tourist stands in awe of the concrete labyrinth that has swallowed him.

Side view of these expansive temples.

A wide angle of Angkor Wat. 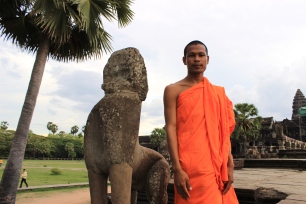 A monk poses beside an ancient lion statue near the entrance to Angkor Wat.

Out of all the images from Angkor, these remain the most iconic in my memory. The aspura dancers were carved everywhere.

Ta Phrom is unearthly and mysterious.

A tourist absorbs a book amidst this treasured jungle backdrop.

But these were not just any trees. Trees growing out of the tops of eroding temples. The stark contrast between nature and ancient history set the tone. It was heavenly. Branches stretch to the sky while gnarly roots slither down the temple’s foundations like serpents.

The site was supposedly used as a Buddhist monastery and university by the Khmer King Javarman VII.

Pop culture freaks might be more interested to know that Ta Phrom was used as the backdrop for the Angelina Jolie film Lara Croft: Tombraider.

Jolie’s film helped stimulate the economy in Siem Reap. My guide told me that after the film was released, the area saw a high influx of travelers.

Good for the Cambodian tourist industry; bad for me and my disgust for the excess of tourists. I haven’t seen the film. I was happy to see the site up close and personal rather than through a screen.

Besides, I’m more of a Brad Pitt kind of guy, anyway.

Knotted reality. The base of one of the trees overrunning the ruins of Angkor Thom.

You met recognize this backdrop from Angelina Jolie’s film Tombraider. It was shot here. 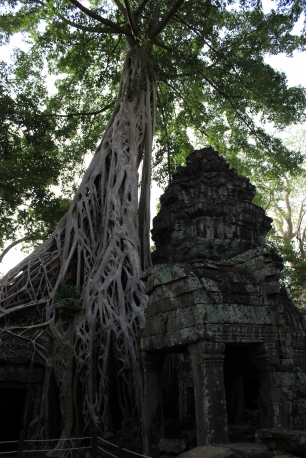 The roots slither down Angkor Thom’s grey ruins like serpents.

The faces may represent Mangalartha, the ancient king of Angkor Thom.

More than 200 hundred stone faces fixate on me.

This is Bayon, the center of Angkor Thom.

Clustered everywhere amongst the temple ruins, the plethora of smiling faces creates an eerie, yet serene atmosphere, especially near dark, which is when I visited Bayon.

The temple was built for Mahayana Buddhist King Jayavarman VII  in the late 12th or 13th century.

Entering the site was otherworldly, as well. To get to Angkor Thom we had to cross a moat.

Mist hovers on the surrounding water. The bridge itself is a masterpiece. A large stone cobra  rears up at the bridge’s entrance to menacingly greet visitors. The snake’s body became the bridge’s railing, being pulled by stone statues of men, which are the focal point of this timeworn bridge.

The sun retreats beneath the horizon as a van of tourists pulls up to get once last glance of Bayon before dark. I snap away for that perfect photo of Bayon’s skeletal stone silhouette, punctuated by the gloomy grey sky.

These sites remain unlike anywhere I’ve ever been.

A Cambodian woman in traditional dance attire poses in front of the many faces at Angkor Thom. 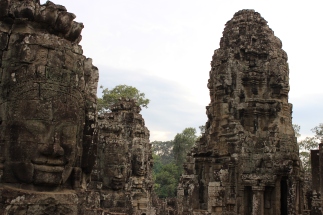 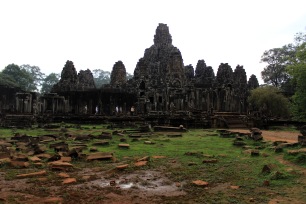 Getting fresh with Angkor Thom. A photographic trick my guide showed me.

An elephant roams near Angkor Thom.

Thousands of these faces are scattered throughout Angkor Thom.

The bridge leading into Angkor Thom is adorned with sculptured images of a cobra being held by dozens of human figures.

Zen. A close-up of one of Angkor Thom’s temple faces. 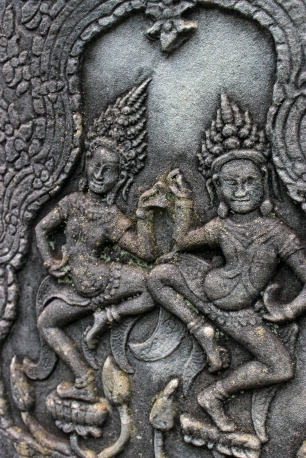 Close-up of the figures built into Angkor Thom’s bridge.

Sunset at Angkor Thom. A tour group scrambles to see the ruins before dark.

-Go at sunrise and sunset. This way you will avoid the heaviest traffic at Angkor Wat.

-Get a guide. You might learn a thing or two. Playing Indiana Jones by yourself will be bewildering and non-informative. You can find a decent English-speaking guide for as little as $10 to $20.

-Stay away from the monkeys. They will attack you. This happened to me. Well, the cement attacked me actually. I fell on my face after a monkey I was photographing got aggressive. He hissed and bared his fangs. I turned to run and tripped on myself. Fear, mixed with clumsiness, got the better of me. It was terrifying.

-Don’t eat at Angkor Wat’s vendors. I got food poisoning from a meager ration of bread and jam. Eat before you go. Enough said.

← Up All Night to Get Lucky: Guided through Siem Reap
The Good Fight: Documentary & Feature Story →