Up All Night to Get Lucky: Guided through Siem Reap 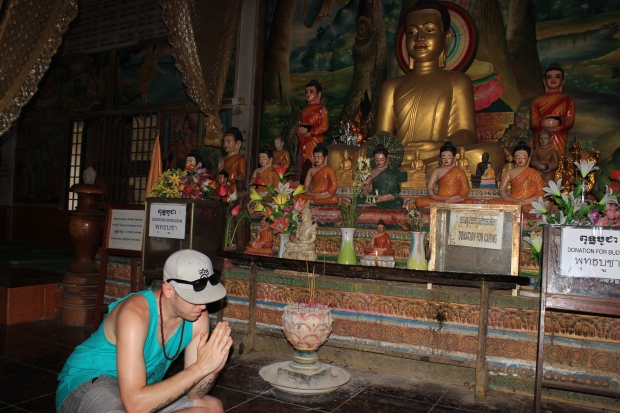 A photo Lucky snapped of me after showing me around a Buddhist temple near his home.

Luck Luck on the tuk tuk.

I arrived in Siem Reap in the late morning after stepping off a flight from Phnom Penh.

Once again, a guide was waiting for me at the airport in Siem Reap. He sat there holding another sign with a strangely spelt version of my name. I threw him my bags and hopped into his motorcycle-drawn carriage.

This was the beginning of my friendship with Lucky the tuk tuk driver.

Lucky invited me to his house to have lunch with family. I obviously couldn’t refuse this.

His motorcycle sputtered to life and we were soon navigating the busy markets and the dusty roads of Siem Reap. We rattled. We rocked. We bumped along. It reminded me of roaring down a Saskatchewan pothole-ridden highway in an old farm truck with no shocks.

Lucky shows off the sugar cane drink he just purchased for us on the side of the country following a cruise into the rustic Cambodian countryside on his tuk tuk. After showing Lucky the photo I took of him, he thoughtfully commented on his own portrait, remarking, “Very handsome.”

I met Lucky’s wife, his two children and his mother-in-law. Aside from Lucky, none of them spoke English. The five of them all lived under the same roof.

Lucky and I sat cross-legged on the floor while his wife served me rice, pork, fish soup and beer. They showed me their wedding photos and I told them about Canada. It was tough sitting cross-legged through the whole meal. I’m too tall for such a maneuver. Lucky jokingly scolded me.

His son was hypnotized by my iPhone. He was full of energy and around the age of five. I showed him how to snap photos. This was my first of two authentic Khmer meals at Lucky’s abode.

I spent a lot of time with Lucky over the course of my next three days in Siem Reap. He told me I was the only tourist he’s ever had over for lunch.

Lucky, too, had escaped the Khmer Rouge genocide. His survival of this troubling period is where he got the nickname ‘Lucky.’ His real name is Outh Rous.

Lucky was saving up money to build a new home for his family in a nicer part of Siem Reap. He worked hard as guide to make ends meet for his family. He took me everywhere. From Angkor Wat, to Buddhist temples, crocodile zoos, rice farms and local bars on Pub Street with authentic Aspura dancers — we had a blast.

A crocodile zoo Lucky took me to. While there, some German tourists fed a live duck to these hungry reptiles.

I helped Lucky create an email account on his smartphone so we could keep in touch. 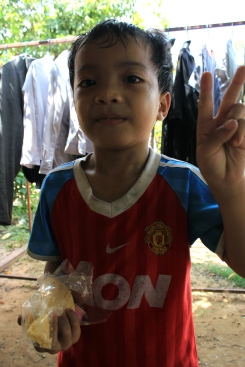 The rest of my trip felt like a blur, but Lucky stayed on my mind days after I left Siem Reap. I thought of his funny boy, too. I decided to visit a Western Union in Singapore. I had more than enough money to get me back to Canada. So I sent Lucky $75 to put towards his family’s dream house. This was more than the three days of guiding I paid him for.

Besides, I would have needlessly pissed it away in a matter of days anyway. Better spent on his family than my foolish lifestyle.

I was the lucky one for getting such a rad guide. Much love my Cambodian brother!