The Beers of Joo Chiat: Hopping into Singapore’s Beer Culture

Grace, one of the co-owners of Cider Pit, pours a local brew on a hot, steamy Singapore evening. 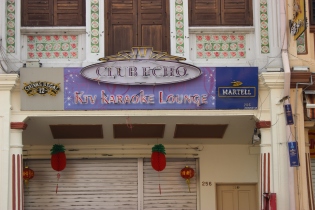 Joo Chiat in the daytime. Karaoke bars dominate the cityscape of Singapore, similar to how barbershops dot the corners of Harlem in New York. This is not the place to look for a decent selection of craft beer. If you do, however, find yourself in such an establishment, Tiger Beer is a safe bet.

By day, Joo Chiat Road is a quaint, bustling street, an enclave of cultural findings on Singapore’s east coast. By night, it transforms into an infamous mini red light district. The squeaky melodies of karaoke singers echo off the street as people hurry in out of restaurants for feasts of chile crab and pho. Ferraris, Lamborghinis, and other fancy sports cars cruise by.

Located in the area of Singapore known as Katong, Venue’s location makes for a speedy commute to Bedok where I’m working at cultural magazine Asian Geographic. Although my room is compact, hosts the odd cockroach, and taxi drivers have whispered to me about the building’s history as a brothel, I’ve fallen in love with the area and its resident business owners. Nostalgia washes over me when I go for my walks in search of my daily fix of Vietnamese coffee. The neighbourhood reminds me of my days living in East Vancouver.

In the vortex of humidity that is Singapore, a cold beer is always a welcome thought after a day of occupying a sweaty, poorly air conditioned office. So far,  Joo  Chiat hasn’t disappointed.

Enter Cider Pit, a little British pub across the street from my hotel.

The Cider Pit has some of the most diverse selections of beer & cider in Singapore.

The Cider Pit is small but packs a punch in personality.

Here, you’ll meet the local crowd, as well as many expatriates from around the world. British, Scottish, Irish, American — and apparently Canadians — stroll through Cider Pit to get a taste of Western Culture.

The owner, George Kirton, a 30-something entrepreneur from Britain, operates Cider Pit, as well as a liquor store down the street. This guy knows his brew. His lovely Chinese wife Grace is often busily mulling about, pouring pints for customers, too. One thing that’s definitely apparent is Cider Pit’s dedication to bringing the world’s beers and ciders to Singapore.

George Kirton, a British beer enthusiast living in Singapore, pours up a pint at his bar The Cider Pit on Joo Chiat Road.

They have three local Singapore craft beers on tap and import nearly 100 different varieties of beer mainly from the United Kingdom. However, Cider Pit also offers ales from Belgium, Germany, Australia and New Zealand. I’m not a huge cider fan but the compact, smartly decorated watering hole offers as many flavors of cider, from toffee apple to ginger to pear strawberry and tutti frutti.

Cider Pit offers so many beers that have never graced my palette in North America. Badger Brewery, A U.K-based brewery, has snatched my attention. There are 10 varieties of Badger served at Cider Pit and so far Fursty Ferret, Golden Glory, England’s Own, and Tanglefoot are a few of my favourites.

“Badger is an interesting thing,” describes Kirton. “They’ve been around since 1770-something so it’s a really well established brewery. What they’re doing now is traditional beers in a very approachable way. They have a very clean taste. Very refreshing.”

Kirton’s favorite Badger variety is England’s Own, a beer bursting with hints of white grape and elderflower. He explains it’s a suitable liquid companion for meals of fish or chicken.

“It’s light and refreshing and has some lovely flavours. Slightly floral but not too sweet,” he adds.

Mike Morris, Badger’s export manager of three years is responsible for stocking Cider Pit’s supply of the British craft beer. He also stocks a few other Singapore pub locations with Badger. He explained that Bagder is marketed in 25 countries across the globe and are slowly expanding across Asia including other places like China and Hong Kong. Sadly, Badger is not available in North America, but the company is looking for an importer in the United States.

“Like lots of other parts of the world Singapore is now waking up to craft beers from different parts of the world,” says Morris. “Whereas previously it had been dominated — and still is really — by the big international lager brands, but people are starting to experiment.”

The many faces of Badger, a U.K. craft brewery with ancient origins that is popular at The Cider Pit.

Cozying up to a pint in Cider Pit.

Jungle Beer is my go-to local favourite at Cider Pit. The microbrewery has roots in Bali, Indonesia and delivers a tropical vibe in the form of frothy deliciousness.

“We set out to create beers that embody the spirit of the tropics — rich, vibrant, full of character. Beers that don’t just quench your thirst, but make you pause and relish,” says Jungle Beer’s website.

Armed with an arsenal of undeniably tasty stouts, porters, amber, and pale ales, Jungle Beer is one of the few beacons of excellency in the dessert that is Singapore’s local craft brew scene.The Tropical Wheat series, however, is Jungle Beer’s magnum opus. If you have a sweet tooth, you might develop an unquenchable lust for the Tropical Wheat series that features Mango-Orange, Mango-Rose and other flavours.

Jungle, too, has felt the constraints of Singapore’s monopolized corporate beer market.

“Singapore has traditionally been dominated by one or two large brewing companies,” says Aditya Challa, a brewmaster at Jungle Beer.

“In the last three to five years, there has been a lot of interest in craft beers from a younger and increasingly more affluent section of the population. Craft beer has grown exponentially during his time but has somewhat been hampered by the high real estate costs and taxes that favor high volume beers over speciality beers,” Challa added.

The company has even been recognized by the Asian Beer Awards, the largest beer awards ceremony in Asia that annually sees upwards of 500 entries from around the continent. The next Asian Beer Awards unfolds in Singapore on June 12 to 15, 2014.

In Halifax, Garrison’s raspberry wheat beer is my favourite east coast craft brew in Canada, but Jungle Beer’s Tropical Wheat Orange-Mango has been throwing some serious jabs at my taste buds that might cause my affinity for Canuck craft brews to evaporate if I stay in Singapore much longer.

Brewerkz Microbrewery is another local brewery in town. Other establishments in the area that serve a variety of beers are Immigrants Gastrobar on Joo Chiat Road and Smokeys, a neat American barbecue joint and sports bar nearby that broadcasts a lot of hockey games.

Of course, Tiger Beer is a staple of any Singapore pub, Cider Pit included. The country’s national beer, Tiger is to Singapore what Budweiser is to America, what Corona is to Mexico, and what Heineken is to the Netherlands. Frankly, it’s a bland pilsner-styled ale that has monopolized the Southeast Asian beer market. It goes down like water and is popular throughout Southeast Asia. It’s also much cheaper than the aforementioned imported and local craft beers but is mass produced, and lacks the quality of Jungle Beer or Badger. Just look for the orange and blue.

If you plan on experimenting, bring your wallet. Beer can be expensive in Singapore. Pretty much everything is imported, which drives the cost up. A pint can sometimes cost $15 in bistro, pub or club. Cider Pit is modestly priced for their local brews, but I can’t stay too long before imbibing my budget.

Nonetheless, Singapore’s beer culture has left a lasting impression on me. Maybe on my next trip to Singapore I’ll be able to track down a durian wheat beer. I’m looking at you Jungle Beer. And according to the Jungle Beer brewmaster Challa, craft beer won’t be going anywhere soon.

One thought on “The Beers of Joo Chiat: Hopping into Singapore’s Beer Culture”