Kali: Goddess of the Gods

Kali, the iconic goddess of Hinduism.

Praying to another Kali statue.

Her name is Kali and she is pretty much the coolest divine power in any religion I’ve seen, ever.

The consort of Shiva, and goddess of time, Kali is both loved, feared and praised in Hinduism. Sri Veeramakaliamman, built in the late 1800s, was constructed in her name. The Bengals and Indian people who first settled Little India thought Kali a suitable goddess to represent their new temple. They believed she would keep them safe in a new, strange, foreign land that was colonial Singapore.

However, to most North Americans Kali might appear as something from the script of a horror movie.

A fierce goddess, she is often depicted as being blue, having four or 10 arms, dark black hair, fangs, and a protruding tongue. At one of her main shrines at Sri Veeramakaliamman, Kali feasts on the intestines of a man, while her consort Shiva lies mercilessly at her feet. The depiction represents an iconic Hindu legend. 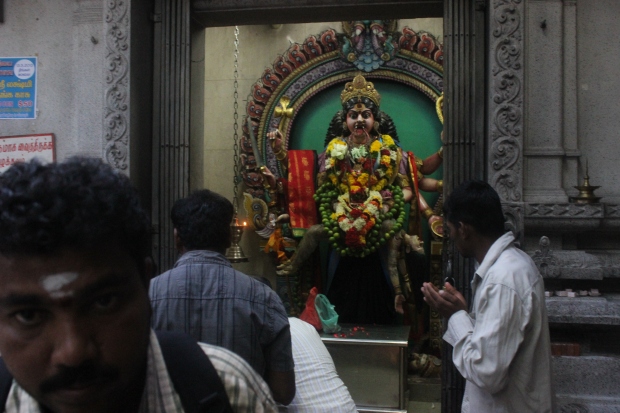 Hindus gather in large numbers at Sri Veeramakaliamman on Sundays.

Kali, in a fit of belligerence following a successful battle against an army of demons, begins to dance in celebration of her victory amongst a battlefield of corpses. Her dance shakes the world, wreaking havoc everywhere. Shiva falls to Kali’s feet to stop her from destroying the universe. With her foot on Shiva’s chest, Kali slows her roll and calms down.

Embarrassed and ashamed of trampling her husband, Kali sticks her tongue out. In this pose, she puts Gene Simmons and the entire entourage of KISS to shame. She often brandishes a sword and sometimes wears the heads of 50 men around her neck, which symbolizes her divine knowledge. Her earrings are even the heads of the dead. Basically, you don’t want to mess with Kali. Despite her sometimes violent perception, Kali is considered the benevolent mother goddess of Hinduism. Oh, and did I mention she’s closely associated with Tantra, too?

There are dozens of statue representations of Kali at Sri Veeramakaliamman and not all of them are as violent and menacing as just described. However, Kali’s ruthless form is my favorite.

4 thoughts on “Kali: Goddess of the Gods”