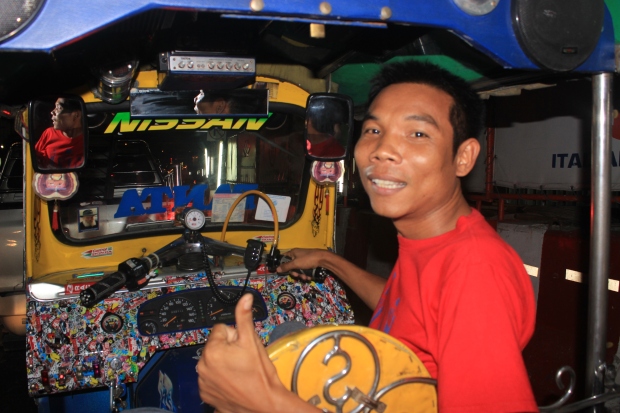 A Bangkok tuk tuk driver gives a big grin after a long drive through the Bangkok streets. Tuk tuks are the primary medium of transport here. 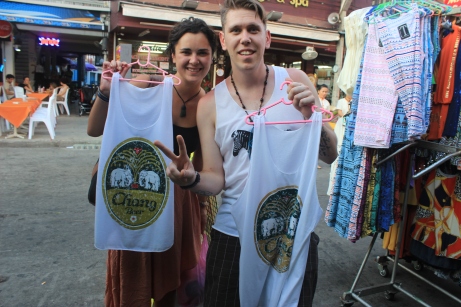 We LOVE Chang — so much that we bought shirts of Thailand’s number one brew.

Here are some simple phrases I picked up during my Thai travels. I hope you like saying these words as much as I do.

Chang – My favourite Thai beer. The one with the elephants. At 6.4% alcohol content, it’s both potent and smooth. I’ve heard the alcoholic content isn’t regulated closely so it could be even more than this — or less. It’s worth the gamble. Nothing beats cooling off after a sweaty, Thai day with a Chang.

฿aht – Thai currency. The best form of money ever. I can’t operate in anything else. Plus, it’s just really, really fun and addicting to say. Try it. You’ll be hooked. 1 baht equals $0.03 USD. But you know what they say: Mo’ baht, mo’ problems.

Ladyboy – Unless this kind of thing is up your alley, I strongly suggest staying away. They’re everywhere. And they solicit you. Aggressively. They might look like pretty girls, but don’t be fooled: underneath it all they’re likely sporting packages. Yes, male genitalia. You don’t want to be that guy. Or maybe you do. I don’t know. You’ve been warned. 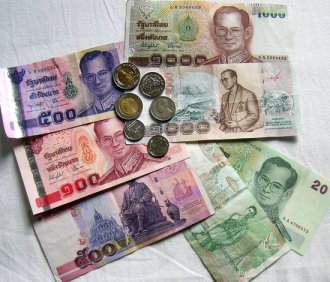 Throw it up, throw it up. All I see is ฿aht. Thai King Bhumibol Adulyade or Rama IX’s face is all over the currency. He’s the longest serving head of state in the world and has reigned since 1946. Oh he’s also worth a reported $30 billion USD. That’s ฿1,015,023,000.   Baht trillionaire. Basically, he’s a boss. Photo courtesy of http://www.pandintong.com

Tuk Tuk – the transportation standard in Bangkok. An open, door-less carriage attached to a motorcycle. You have experienced the streets of Bangkok until you let your blow in the back of one of these bad boys. Oh, by the way the drivers are crazy. I’d recommend buckling up but there are no seatbelts.

Kapungkum – ‘Thank you’ in Thai. If you have made no effort to learn the language, pick up this simple phrase. The locals will like you more and it shows you’re interested in trying to learn their culture. If you really want to be authentic, try saying this while bowing, with your hands pressed together like you’re praying.

Time to dummy the beaches of Thailand. The Canadian backpacking dummies who invented the increasingly popular phrase: ‘Dummy.’

Dummy – A new addition to the Bangkok Urban Dictionary, the word is quickly gaining traction amongst Thailand’s international backpacking community. A verb that is interchangeable in a variety of situations, the phrase is as versatile as it is robust, however it is often employed in relation to discussions pertaining to drinking.

Ex. “Before throwing some baht down on the table to pay his server, Brent dummied the last of his piña colada.”

“How was your flight? Good. We dummied it.”

“Dummy that mosquito on the wall before it gives us malaria.”