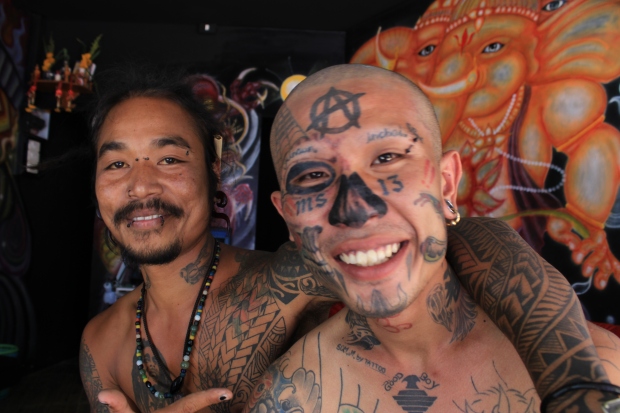 Tattoo artists on Kho Phi Phi in Thailand. On this small island, tattoo artists are the celebrities, often dripping from head to toe in permanent ink. Notice the MS-13 gang tattoo on the fellow on the right’s face. 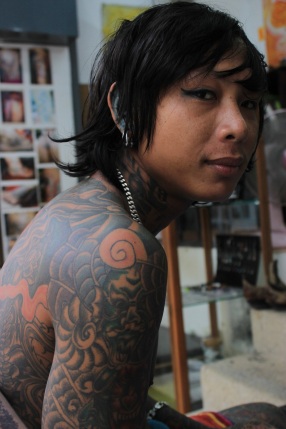 Brennon Hittel, a Canadian backpacker from Medicine Hat, Alberta knows this all too well.

Brennon spontaneously inked a full moon on his forearm at 3 a.m. following a night of clubbing on the beaches of Koh Phi Phi last week. When the sun rose at 6 a.m. he had more craters on his arm than Neil Armstrong had ever laid eyes upon.

However, he’s not alone.

Phi Phi is a hotspot for tattoo tourism. Every year, thousands of foreigners flock to the island’s tattoo parlors to etch enduring memories onto their skin. 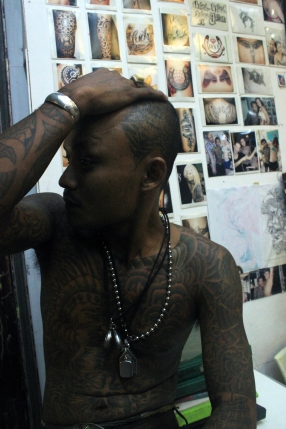 Mr. M, one of F Bamboo’s tattoo artists near the beaches of Phi Phi.

Puanggun, 38, a scuba diver in the mornings and tattooist by night, has been inking tourists up for upwards of 10 years. For people like Puanggun and those in Phi Phi’s ink industry, tattooing is a sacred art. Most artists’ bodies are draped in ink — from head to toe.

“They not only one time come here — they come to Phi Phi [and] there’s second time they’ll come. And they come, they’re going to get from us again. Some customers come to get tattoos every year and they like us a lot.” 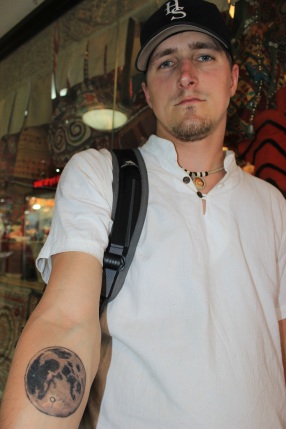 Backpacker Brennon Hittel displays the bamboo tattoo of a moon he received in Phi Phi a few days prior. His skin is nearly fully healed here. 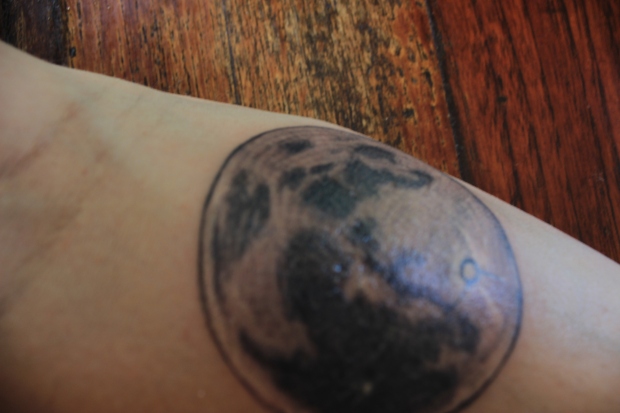 Brennon of New Moon. Brennon’s permanent memory of Thailand, a token of his insanity on a night defined by drunken debauchery.

“Lots of drinking [inspired me to do this]. It seemed like that was the time to do it,” says Brennon, 27, who also has a machine tattoo on his back and another under his lip.

“My mind was blown. It’s a good life story — a good journal on my body.”

“Everybody thinks I have AIDS now,” he jokes.

“My mom is probably going to freak out but she’s just happy I’m alive and all my friends think I’m crazy,” Brennon says.

Contrary to health concerns some people might have, tattooing here appears to be harmless.

“I was still was safe about it. I made sure the needles were clean. The ink was good. They were pretty legit about that.”

There’s a special ingredient that makes this is a special place to get inked up; and it boils down to an ancient Thai tradition. Bamboo tattooing — not conventional machine inking — is the medium here.

Fine needles are attached to a thin stick of bamboo rather than a machine. 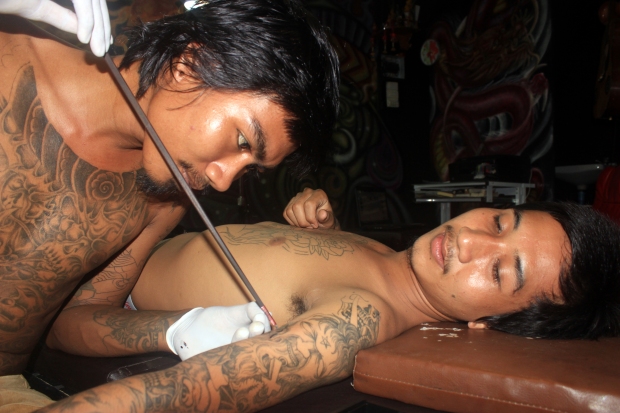 A client of a Phi Phi tattoo artist calmly watches as he receives some fresh ink. Bamboo tattooing is less painful, retains colour better & allows the recipient of ink more freedom in the days following the procedure.

Unlike conventional machine tattooing — where drink inking, as well as swimming or sun tanning are discouraged — bamboo tattooing allows the recipient a little more freedom.

Bamboo tattooing is suited for sloppy drunken travelers who may not be sober under the needle. The technique also retains the tattoo’s vibrancy over time and caters to those who want to spend time in the sun and water the next day. The healing process is typically between three and five days.

“You can swim the day after. Everyone who comes here they want to be in sun or go swimming,” adds Puanggun.

The method punctures but doesn’t tear skin and is less painful than machine tattooing, too.

“It was way less painful for bamboo,” says Brennon.

“I didn’t draw blood once. It’s much more interesting this way.” 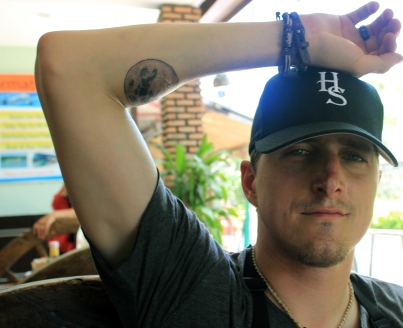 Dazed & confused the morning after the deed. Brennon was still in awe, shock & pain from the night before when he decided to ink a full moon on his forearm between 3-6 a.m. on Koh Phi Phi.

Like a werewolf, Phi Phi transformed Brennon into a different sort of beast at night: not quite animal, but not quite human either. The tropical island often has this effect. His ink moon symbolizes his sometimes reckless personality.

“I find the moon to be representative of a crazy side I have when I drink,” Brennon says.

Tattoo artists like Puanggun frequently have problems with intoxicated travelers. He prefers to book his customers when they’re sober. Although this standard definitely varies on Phi Phi, Puanggun will only ink incoherent clients if they’re not completely out to lunch.

“Some come very drunk. We like to book them before and then they go to get drunk and come to do it. But we cannot do if they’re too much drunk and want to do tattoo. We say we don’t deal with drunk people,” Puanggun explains. 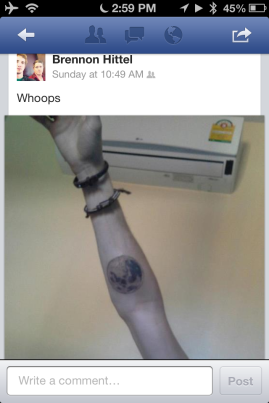 Incoherent ink. The iconic Facebook post that launched a controversial discussion amongst Brennon’s friends & family in Canada. People were critical to say the least.

In Thailand, enough baht can get you whatever your heart desires, and I’m sure some artists turn a blind eye to this apparent issue if your wallet’s big enough.

3) “Oooh Brennon from a health care perspective, of all the countries to get a drunken tattoo in ..  Thailand is one of the least appealing lol.”

4) “That looks like the chick’s arm from The Ring.”

5) “I call bullshit. Number one…. That arm is too skinny, number 18…. Your arm is gray…. I think that’s the arm of a corpse you just so happened to have found when you woke up after the moonlight party, “you didn’t go to”….. ‘Thailand….. What a crazy place….’”