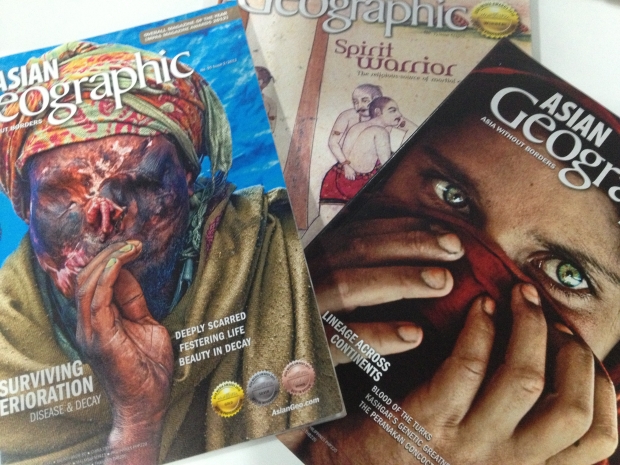 Here are a few of the more recent issues of Asian Geographic and where I’m working in Singapore. 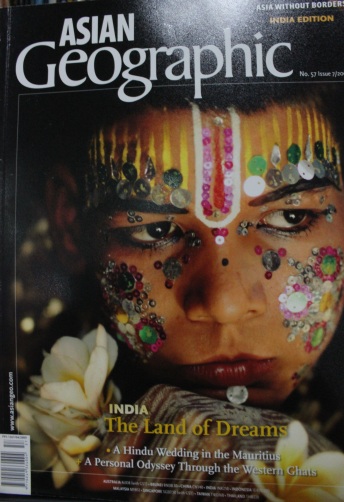 The July, 2008 issue of Asian Geographic, which includes a story I penned on Hindu weddings in Mauritius. This was the first magazine story of my career & they even played it on the cover.

Asian Geographic is going to be my home for the next month. So far, the experience has been a blast. The magazine focuses on diverse cultural issues and topics across Asia, with a similar approach to National Geographic. Many stunning photos and stories you would never hear of anywhere else. Hopefully I can learn a thing or two in my time here. One of Asian Geo’s recent issues tackled the deplorable conditions of Indonesian mental hospitals and also explored a variety of flesh eating diseases across Asia (See the above photo in left corner).

Though lots of my friends and colleagues back home may have never heard of Asian Geo, it’s published in 50+ countries around the world and widely distributed across Asia. So far I’ve been writing small pieces on things like the evolution of certain regional dialects in Myanmar and Vietnam and traditional ghost stories of particular Asian cultures. 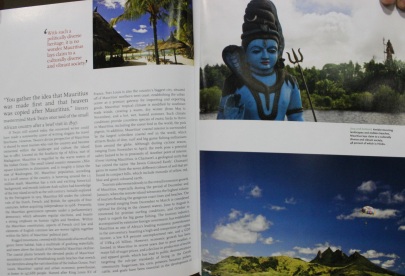 A sample of the article on Hindu weddings & the incredible photographic capabilities of Seattle photographer Stuart Westmorland.

A team of roughly 20 of us work out of an old, closed down Hitachi chemical factory in the area of Singapore known as Bedok. Although the location is kind of obscure and ants sometimes crawl across my desk, I’m just pleased they have air conditioning. I’m one of three interns and the only Canadian to grace the office. The closest thing to a Canadian is my colleague Ralph, a 30-something native of Switzerland. We often smoke cigarettes together. Ralph also likes to spontaneously break out into karaoke sessions, which are quite entertaining. He recently serenaded the office with his own special version of the Backstreet Boys’ “Show Me the Meaning of Being Lonely.” Quite touching. See the below video for a sample of Ralph’s harmonies.

Mark Song is another interesting character. A Singaporean, and a fellow intern, Mark seems more Canadian than me. Mark, 23, is an avid hockey player and fan. Yes, a hockey player. We converse about hockey regularly and he even wears Detroit Red Wings and Edmonton Oilers T-shirts to the office some days. Despite the +30 weather in Singapore, hockey is actually a thriving sport here. Check out my post on hockey culture in Singapore here.

Most people are very curious at how I wound up at Asian Geo.

It actually all stems back to 2008 when I freelanced a cultural feature for the magazine on Hindu weddings in Mauritius, a small African country in the Indian Ocean that’s near Madagascar. I have never been to Mauritius and had not been to Singapore at this point in my life, but was approached by a very talented dive photographer from Seattle to pen this piece. His name is Stuart Westmorland, a friend of my uncle, who also happens to be from Mauritius. While in Mauritius, my uncle arranged a few activities for him and even put him in touch with his family if I’m not mistaken.

Westmorland was lucky enough to attend a Hindu wedding after being randomly invited by a taxi driver he had just met whose cousin was getting married. In case you didn’t know, Hindu weddings are incredibly elaborate, beautifully orchestrated affairs, often lasting several days. It’s one real party.

After returning from the island paradise, Asian Geo showed interest in his photos. With only a few days to pen the story, Westmorland — who knew I was a writer through my uncle — approached me to do the writing. Without his offer to to write the words to accompany his amazing images, I might not have landed the internship I’m currently in now. In fact, that story got me numerous journalism gigs over the years and I continue to use that story as clippings for my resume. I’m eternally grateful for Westmorland’s helping hand and we stay in touch to this day. I’d be doing him an injustice if I didn’t promote his dazzling photography, too. Check out Stuart Westmorland’s website here.

I’m hoping to do a few full-length features by the time I’m done. I’m still toying over ideas, two of which are coming together. It looks like I will be doing a 2,000 word feature on a Jamaican-Canadian source (and friend of mine), Michael Fisher, who is a kickboxing priest back home. He’s No. 2 in the world for kiro kirshin, a certain type of martial arts but is a leading religious figure in Halifax’s Baptist community. Luckily, this pitch coincides with an MMA feature the magazine was already planning on doing prior to my arrival. What also makes it relevant is Fisher will be traveling on a mission from his church to Thailand and Singapore in the coming weeks.

The other story I’m working on involves a Southeast Asian prison feature. This story is proving more difficult, as gaining access to prisons in Thailand, Laos and the Philippines is much trickier than I anticipated. I’m also very excited to be traveling to Malaysia this week to cover a story on a rural village’s new, safe, clean drinking water source too.

I’ll keep everyone updated and have more on all of these stories soon!